Science As Politics; Politics As Science

You gotta love Kathleen Hall Jamieson. Jamieson is the doyenne of political communication. 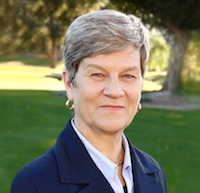 In addition to her impressive career as a public affairs and media scholar at the University of Pennsylvania, Jamieson is one of journalist Bill Moyers’ go-to sources [Moyers 2012]. Pop open a video a Moyers’ program on media and politics, and you’ll find Jamieson, primed for a well-reasoned, fact-checked discussion.

At the National Association of Science Writers 2015 meeting in Boston, Jamieson was among the speakers discussing science, knowledge, and public opinion.

Surrounded by a horde of science writers, Jamieson made a confession: “I was interested in politics, and quickly discovered I needed to know science.”

Jamieson was referring to the ways politicians massage science. For instance, former presidential candidate Michele Bachman once told reporters that a vaccine caused a child’s mental illness, while Donald Trump recently announced that vaccines cause autism. Jamieson urged writers to weigh carefully the time and space they allow politicians to trash-talk science.

Continuing any coverage of the vaccine-autism fraud means the controversy also continues its foothold in mass media.

Jamieson said political orientation is often related to what folks think about science, according to a Pew Research Center report [Funk 2015].

While 71% of Democrats and Independents agree “the earth is warming due to human activity,” only 27% of Republicans agree. That difference is robust and statically significant.

But political leanings aren’t the only predictors of science beliefs. Take evolution, for example.

Your education and religion are associated with whether you believe humans and living entities have evolved over time. For the mass public, about two-thirds agree (65%) with scientists about evolution and one-third (31%) dispute the fact. Those with a college degree are even more convinced of evolution (75%) while about one-in-two high school drop-outs (39%) dispute science.

Evangelical individuals overwhelmingly ignore science, with 64% rejecting evolution. In contrast, Catholics tend to be more accepting of evolution, with about three-quarters (66%) taking a more scientific view.

Although religion and politics reflect just some of the linkages with how we approach science, the teaching moment was summarized in this way: Education and knowledge are the best predictors for fact-based and scientific beliefs.