Opportunities in Open Source at the Tapia Conference

The 2015 Richard Tapia Celebration of Diversity in Computing Conference brought together over 800 students, faculty, researchers, and industry professionals in Boston, Massachusetts in order to promote diversity in computer science. This year's conference focused on finding ways to scale up tech sector diversity and inclusion initiatives and was the largest Tapia Conference to date. 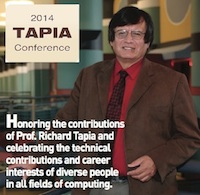 An Opportunities in Open Source panel was aimed at anyone interested in learning about open source culture and how to collaborate on an open source project. Marina Zhurakhinskaya, the Community Engagement Lead at Red Hat, moderated the discussion. She leads Outreachy that helps people from underrepresented groups become involved in open source software (OSS) projects. Panelist Shauna Gordon-McKeon is Program Director for OpenHatch -- a non-profit dedicated to educating the public, especially college students, about how to participate in the open source community. OpenHatch connects beginners with open source project mentors. The other two panelists were Jonathan Garcia-Mallen, a MIT undergrad who works on open source robotics, and Cindy Pallares-Quezada, a University of Texas at Dallas student and a part-time Red Hat intern who works on an open source cloud-computing platform called OpenStack. Below we review the major points from the panel discussion. The slide presentation from the session is available here.

In open source software, the computer source code is freely available for anyone to use, study, share, and modify. Open source technologies play a vital role in our electronic lives: approximately a third of all web servers and mainframes [W3Techs] and three quarters of all mobile devices [Whittaker 2013] run an open source operating system. More than 60 million websites use WordPress, an open source content management system [O'Dell 2013]. There are hundreds of thousands of open source projects across many domains such as networking, education, browsers, music, video games, and science. Some open source projects are common household names like Wikipedia and Mozilla.

There are many different licenses that are used within the Free and Open Source (FOSS) communities. One of the most common is the General Public License (GPL). Software under the GPL can be copied, distributed, and modified where the changes must be tracked, released to the public, and also licensed under GPL. Software such as the Linux kernel operating system, the GNOME interface, and WordPress blogging platform are all GPL licensed. Another popular license is the Apache License that is less restrictive meaning that changes do not need to be released to the public. This allows the code to be used in proprietary software such as Android, Hadoop, and OpenStack.

open source projects should be accessible, yes open, to everyone

However, "free" does not mean that open source contributors are volunteers working for no pay. For example, the company Red Hat publishes on open source Linux distribution, employs 6,500 people, and brings in 1.5 billion dollars per year in annual revenue [Red Hat]. There's a general misconception that people develop free and open source software in their spare time. While that may be true in small projects, the majority of people working on big projects get paid to work on projects full-time. Sometimes big open source projects are a collaborative effort between different companies. Then how do corporations make money on software that is freely distributed? Companies can sell support contracts and expertise for the software if the code is complicated to install and maintain. Many open source licenses state that software comes with no guarantees. This allows entrepreneurial companies to sell customer support services and software "enterprise" versions with code enhancements such as extensions or themes.

Across the whole software industry, employers like to see code samples; and, they hold open source contributions in high regard. By contributing to open source software, job seekers can show prospective employers their skills and potential. A survey of over 1000 hiring managers found 93% planned to hire a Linux professional within a year, with a third saying that they would offer flexible schedules and telecommuting to recruit talent [Linux Foundation]. Thus, working within the open source community can be an excellent way for new coders to get a foot in the door to a programming career. However the industry should be mindful of the effect on workforce diversity [Dryden 2013].

What are some barriers that minorities face in joining open source?

The Tapia conference OSS panel described problems that can block someone from entering an open source community such as education, free time, mentors, the privilege of breaking things, and psychosocial issues. These barriers may be exacerbated for Hispanics, Blacks, Native Americans, women, and other underrepresented people in the tech industry. These groups may not have the same educational background as their majority counterparts with respect to coding skills. Open source projects and user documentation are readily available online. However that is of little help if someone does not know where to start and how to find projects. Mentors can help address that gap; but, identifying people willing to help is another barrier if a new person's network does not reach into an experienced open source community. The "privilege of breaking things" refers to having the spare time, freedom, and financial security to work on a project similar to a volunteer internship. Unpaid labor is a formidable barrier in the open source community particularly for minorities [Demby 2013]. Some psychosocial factors that could also affect minorities include imposter syndrome which is when someone feels that they do not belong because they assume a lack of competence relative to the community around them [Scicurious 2012]. Another issue might be stereotype threat which is when a person is reminded or aware of stereotypes about one's minority group that then cause them to underperform under this stress [Wikipedia].

These barriers have motivated the creation of organizations that support underrepresented minorities in the tech industry such as Outreachy, OpenHatch, the Ada Initiative, Trans*H4CK, Code for Progress, AlterConf, and many more. Alberto Roca has created a roster of such diversity in tech initiatives that target college students and working adults on his MinorityPostdoc.org Resources page. The initiatives include paid internships/fellowships, educational workshops, mentor matching, and safe space conferences/hackathons.

Where can I find open source internship opportunities?

Google Summer of Code (GSoC) offers a $5,500 stipend and possible school credit in a three-month long summer internship. The "remote" work is conducted off-site much like a telecommuniting job so you can work at home allowing for collaborations across the globe. This opportunity is for part-time and full-time college students worldwide. The program runs from May 25 to August 22; and, the application is due March 27. Participants are involved only in the coding aspects of a project. In 2014, there were 190 open source projects with 1,300 interns; but, only 10% of the participants identified as women.

Outreachy is specifically for women and gender variant people worldwide. Other differences from GSoC are that participants are not required to be students, projects can occur in the summer or the winter, a $500 conference travel stipend is provided in addition to the $5,500 stipend, and projects can include non-coding skills such as design, user interface, documentation, and marketing. The next cycle is for May 25 thru August 25; and, the application is due March 24. Last year the summer round included 16 organizations and had 40 interns. Outreachy also provides a list of opportunities with sponsors that include open source internships and full-time jobs.

The application for both programs is very similar. To apply, choose an organization that interests you and select or propose a project idea. Organizations usually have their project ideas on their self-hosted wiki, which contains information about the project as well as technical documentation. Projects created by the organization should have a mentor that you can reach through email or a communication service called Internet Relay Chat (IRC) popular in the computer science and tech community (For example, see this OpenHatch IRC). Research and plan the project to complete your application according to the template provided by the organization. Accepted interns will be making a relevant contribution to an open source project with the help of your mentor.

The panel is just a start at diversifying the open source community by educating and recruiting Tapia conference participants. In fact, Roca met both Zhurakhinskaya and Gordon-McKeon at the 2014 Open Source Bridge (OSB) conference where they decided to collaborate on a Tapia Open Source panel idea. Roca's experience is in the broader diversity activities occurring in the sciences especially in academia. His goal in attending OSB14 was to learn about any efforts in the private sector for diversifying the tech workforce. Roca identified the Portland, Oregon based non-profit Open Source Bridge conference as one that championed equity and inclusion in its content, speaker selection, and price. (By contrast, OSCON is a much more expensive industry open source conference run by a corporate publisher.) However, he noticed that OSB14 was primarily populated by a white audience reflecting the general open source programmer community. Thus, bringing Outreachy and OpenHatch to the Tapia conference would introduce these projects to an audience of many students and professionals of color and the disability community. For the 2015 Open Source Bridge conference, Roca and Gordon-McKeon spoke on a panel recapping the lessons learned from the Tapia OSS diversity collaboration.

Other places where the diversity in open source conversation is occurring include social media, online magazines such as Model View Culture, and online portals such as the Geek Feminism Wiki.

There is still a lot more diversity work to done. Established open source contributors, educators, and tech leaders need to become more pro-active in providing encouragement and mentoring to new participants generally and underrepresented people specifically. Even the venerable Linux kernel project has recognized its diversity challenges [Brodkin 2013] so they recently published a code of conduct. Though the policy statement has been criticized [Model View Culture], it is a start. For open source projects to have a long-life, they should be accessible, yes open, to everyone. 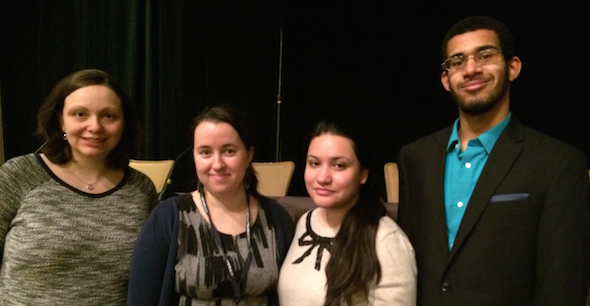 A. Dryden (2013) The Ethics of Unpaid Labor and the OSS Community

Cindy Pallares-Quezada is a senior majoring in electrical engineering at the University of Texas at Dallas and is also a software engineering intern at Red Hat. Diana Crow is a Boston-based freelance science journalist. Shauna Gordon-McKeon is the OpenHatch Program Director. Marina Zhurakhinskaya is a Community Engagement Lead at Red Hat, a board member at the Ada Initiative, and organizer of the GNOME Foundation's Outreach Program for Women. Alberto I. Roca, Ph.D. is the Founder and Editor of MinorityPostdoc.org. Any opinions expressed in this article are solely those of the authors.

The citation for this article is:
C. Pallares-Quezada, D. Crow, S. Gordon-McKeon, M. Zhurakhinskaya, and A.I. Roca (2015) Opportunities in Open Source at the Tapia Conference. DiverseScholar 6:3 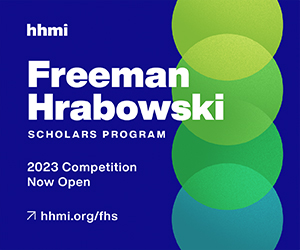