Minority Postdocs are the Source for Future Faculty of Color

Postdoctoral scholars are the primary candidate pool for open faculty positions especially in the STEM disciplines at research universities. Mentoring minority postdocs will create a talent pool for recruiting future faculty of color. We will describe our MinorityPostdoc.org website, DiverseScholar Doctoral Directory, and professional development & advocacy activities that are directed toward diversifying the professoriate. We also present the results of our diverse postdocs survey revealing the demographics of our faculty candidate pool. 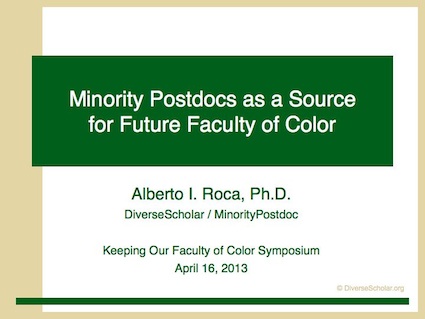 DiverseScholar activities first started in 2003 when Alberto I. Roca, as a postdoc, founded the Postdoc Committee of SACNAS – the Society for the Advancement of Chicanos and Native Americans in Science (Roca 2005a). He also co-founded the NPA Diversity Committee of the National Postdoctoral Association (Roca 2005b). Since that time, his activities have been documented on his website, MinorityPostdoc.org. Since 2010, Dr. Roca has been working full-time on helping postdocs achieve their career goals by acting as a career coach as well as organizing professional development workshops (Brooks 2011). He also connects diverse postdocs to stakeholders (such as academic Chief Diversity Officers) who are responsible for diversifying the professoriate.

The mission of Dr. Roca’s new non-profit, DiverseScholar, is to promote the recruitment, mentoring, and success of diverse postdocs thereby facilitating the diversification of the doctoral workforce (Roca 2012). While collaborating with SACNAS, the NPA, and many other professional societies, Dr. Roca noticed that efforts to diversify the STEM professional workforce were not cohesive. Many diversity organizations and conferences were discipline specific and/or focused on a specific cultural identity. These ideals are fine for networking among like-minded scholars such as for peer-to-peer mentoring. However, such balkanization poses a challenge for individual allies, institutions, and especially recruiters championing diversity in general. For example, recruiters will have multiple competing demands on their limited time and funding when attempting to expand the diversity of candidate applicant pools. Furthermore, since minority postdocs are so few in number, our new organization sought to disregard these discipline and cultural identity divisions when designing activities for recruiting and professional development. This may allow a critical mass of diverse, junior doctoral professionals to come together for a new, self-sustaining community. Thus, besides being cross-disciplinary, DiverseScholar works on diversity broadly defined including gender, ethnicity, sexual orientation, disability, etc.

Many "diversity" issues are similar for minorities at every career step; but, some are distinct to the postdoctoral stage (Roca 2010a). For example, can affirmative action ideals and policies be applied to non-advertised postdoc positions? The most competitive and lucrative postdoctoral training experiences are created by an informal, mutual agreement between the prospective candidate and the advisor thereby circumventing the typical employee recruitment process. Importantly, postdoctoral scholars, not students, are the primary candidate pool for open faculty positions especially in the STEM disciplines.

Navigating a successful transition into (and presumably out of) the postdoctoral stage will depend upon a trainee's networking skills and the relationships with their current and future supervisor. Gender and racial issues will surely compound these already precarious career transitions. Unfortunately, most research on diversity and broadening participation has ignored postdocs thus creating a large knowledge gap. Therefore, an analysis of the scholarship and practice on postdoctoral training is timely in light of recent calls to action. The National Academy of Science COSEPUP committee is reviewing the "State of the Postdoctoral Experience for Scientists and Engineers" ten years after their milestone study (NAS 2000). Notably, a retrospective review 35 years after the landmark Double Bind report "did not reveal a single empirical study about women of color postdoctoral fellows" (Ong 2011).

What is the nature of the minority postdoctoral population? Based on published surveys (Davis 2005), Dr. Roca estimates that nationally there are around 2,000 domestic, underrepresented postdocs from the Hispanic-, African-, and Native-American communities (Roca 2010b). The DiverseScholar organization has developed a unique Doctoral Directory of diverse postdocs as a first step toward building a community to support their needs. Currently, our email contact list has over 1,100 individuals culled from various diversity intervention programs, conferences, networks, and brute force online searches. Dr. Roca has conducted an internal survey of this postdoctoral population and is also collecting their CVs. What follows are demographic and career observations of the survey respondents.

Greater than 90% of the respondents are U.S. citizens (or permanent residents) and greater than 65% are females. The average age of the postdocs is 33 years old; and, they have been training as a postdoc on average for 2.5 years. With respect to their research, Dr. Roca's survey shows that 65% of these postdocs are in the biological sciences as expected from the preponderance of NIH funding. Greater than 70% of survey respondents indicated that they desired a future academic career. A smaller subset of 20% exclusively wanted a research and teaching faculty career compared with other options such as private industry research, post-academic (i.e. alternative) careers, etc.

With regard to ethnicity, the distribution among postdoc survey respondents is as follows: 42% Hispanic American, 32% African American, 2% Native American, 3% Asian American, 10% multi-ethnic, and 6% Caucasian. Thus, many members of this minority postdoctoral community will face "double bind" challenges since this group is largely women of color. By comparison, in the greater national science and engineering postdoctoral population, only 45% are U.S. citizens (or permanent residents) and only 35% are women according to recent NSF statistics (Einaudi 2011). From the few surveys conducted, the ethnic demographics of the U.S. domestic postdoc population are the following: 4% Hispanic American, 3% African American, and 0.5% Native American (Davis 2005). Therefore, the DiverseScholar Doctoral Directory is enriched for domestic, female, and underrepresented minority postdocs and could serve as a wealth of information about this critical, but underserved, career stage.

The DiverseScholar organization is uncovering the invisible minority postdoc population. Diversity stakeholders and recruiters could utilize our Doctoral Directory for engaging underrepresented minority postdocs especially for faculty diversity interventions. Our communication channels for reaching diverse postdocs include our MinorityPostdoc.org website, monthly email announcements, print DiverseScholar periodical, and live professional development events. Lastly, we are actively seeking collaborators from the higher education community for future, rigorous quantitative and qualitative studies using our unique national database of diverse postdocs. This presentation will engage the audience by soliciting feedback about an attendee institution’s own postdoc population as well as methods for recruiting from a centralized database of diverse postdocs of color.

Alberto I. Roca, Ph.D. is the Executive Director of DiverseScholar, a project of Community Partners, and also the Editor of MinorityPostdoc.org (see longer biosketch). Any opinions expressed in this article are solely those of the author.

NAS (2006) To Recruit and Advance: Women Students and Faculty in U.S. Science and Engineering

M. Ong, et al. (2011) Inside the Double Bind: A Synthesis of Empirical Research on Undergraduate and Graduate Women of Color in STEM, Harvard Educational Review 81(2): 172-209

A.I. Roca (2005b) Diversity as a Life Skill: Collaborations Between SACNAS and the NPA, NPA POSTDOCket newsletter 3(3): 5-6

A.I. Roca (2010a) Issues that Impact the Success of Minority Postdocs, DiverseScholar 0:0