Fulfilling the Education Dreams of a Filipino Immigrant

My name is Meda Higa; and, I am an Assistant Professor of Biology at York College of Pennsylvania, a small private college in Southcentral PA. My current position is the culmination of many years of hard work as an undergraduate, graduate student, and a postdoctoral associate. This is my opportunity to share my love of science with undergraduates in the classroom and through research in the lab. I wear my Ph.D. title proudly, because I know that it has not been years, but generations of hard work, dedication, and sacrifice that have gotten me to where I am today.

I was born in Seattle, WA and was raised by an elementary school music teacher and a middle school science teacher who both constantly emphasized knowledge, music, and education. My parents, aunts, uncles, and grandparents filled me with stories about how my Okinawan and Filipino immigrant ancestors had struggled and persevered to give future Asian American generations a better life. One of these stories is that of my grandfather, my Lolo, Sylvestre Quitolis Carpio.

Lolo Carpio journeyed from La Union, Philippines by boat to San Francisco in 1934. He was part of a generation of Filipino immigrants known as pensionados, or "school boys". These Filipino men came to the United States to pursue education at universities and colleges throughout the country [Le Espiritu 1995]. Lolo hoped to gain a law or economics degree and soon ended up attending what was then the College of Puget Sound (now the University of Puget Sound) in Tacoma, WA. This was during the Great Depression, and, although some were able to finish their degrees, many saw tuition support dwindle and were forced to turn to other jobs to make ends meet. My Lolo struggled with both his health and the ability to pay tuition. He took jobs with a local steel company and the canneries in Alaska and put his dreams of education on hold.

finish your education before you start a family!

I do not know a lot about the early years of my Lolo. But, through a blind date, he met my grandma, Juanita Herrera, an American Indian-born, "Rosie-the-riveter" who worked for Boeing. When they decided to get married in 1945, they found that it would be difficult. Immigrants, and particularly Filipinos, were not looked upon favorably at the time. And in California (where they were living), anti-miscegenation laws made their desired mixed-race marriage illegal. Instead, they were forced to travel to New Mexico in order to wed. They had three children, Brenda (my mother), Sylvia, and Richard. Their early years were spent in Los Angeles, CA but they soon moved and settled in Seattle, WA.

My mother's memories of growing up with my Lolo are few, because he worked a lot and was gone in Alaska for long stretches of time. What she does remember is that "he had so many skills. He was quite adept at mathematics and tax laws. He was more than trilingual (Pangasinan, Illocano, Tagalog, English, and Spanish)." Through the stories my mom told, one thing was very apparent. He was her champion, the one who supported her desire to get an education and become more than "just a secretary". She did just that, earning a degree in Zoology from Seattle University, and then obtaining a Master's degree from the University of Washington. 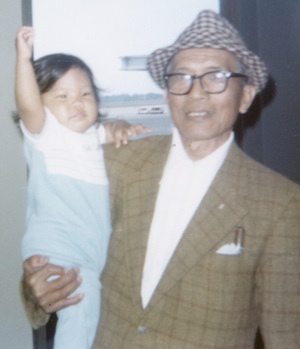 My sister, Maring, and I are third generation Filipino-Americans. We grew up with the understanding that college was not an option -- it was expected. Our visits to Lolo and Grandma's house always included questions about school, what did we like, how were we doing, and the constant reminder to "finish your education before you start a family!" Knowingly or not, I have taken their advice to heart and have continuously made my education a priority, even if it meant moving away from friends, family, and familiarity. Here I am, in York, PA, many miles away from where I began in Seattle, WA. I find myself pondering if this is what my Lolo had envisioned for himself -- to travel far away from family and friends for an education, for knowledge, and ultimately, for a better life. His dreams may have been put on hold; but, I like to think that through my mother, sister, and through me, that they have also been realized.