Promotes Diversity and Leadership in the STEM Workforce

The National Organization of Gay and Lesbian Scientists and Technical Professionals (NOGLSTP) held an Out to Innovate career summit, a first-of-its-kind event for lesbian, gay, bisexual, and transgender (LGBT) professionals in the scientific and technical workforces. The inaugural event, which took place at the University of Southern California campus on October 9, 2010, attracted 180 attendees. Participants ranged from professionals in academia, industry, and government to students and postdoctoral scholars from schools and universities across the country. The event was strategically scheduled to follow the Out & Equal Workplace Summit whose 2000+ attendees come from the wider business community.

The Out to Innovate career summit, spearheaded by Rochelle Diamond and Amy Ross, Ph.D.— co-founders of NOGLSTP, was created as a forum for LGBT students and professionals in the Science, Technology, Engineering and Mathematics (STEM) workforce to discuss leadership, mentoring, and career progression issues. Moreover, the event was designed to foster and motivate the next generation of LGBT leaders in science and technology.

“Until now, there has been so little support for LGBT people in the science and engineering world,” said Diamond. “With Out to Innovate, we hope to provide the motivation for LGBT students in STEM paths to pursue their dreams, as well as provide LGBT STEM postdocs and professionals with the tools to mentor and lead.”

Sessions to Educate and Inspire

The event featured high profile LGBT leaders from a wide range of disciplines. Kei Koizumi, M.A., Assistant Director for Federal Research and Development at the White House Office of Science and Technology Policy, gave a lively morning motivational keynote recognizing the impact of LGBT professionals in our government.

The latter “minority” session was led by mathematics Professor Ron Buckmire of Occidental College. Dr. Buckmire has been a local and national leader on LGBT issues as detailed on his website. Each of the 16 participants made personal introductions and many shared stories of balancing both their LGBT and racial/ethnic identities. “It was a very encouraging sign to see so many minority LGBT scholars who had each devised different strategies for adapting and thriving in different areas of STEM professional achievement” said Dr. Buckmire. He continued: “I think the session was a useful experience for all participants to learn from each other and see the actual faces of other LGBT people of color whom they could relate to.” The testimonials were also enlightening to institutions and allies who are creating support systems for the LGBT community. For example, Vince Garcia of the Point Foundation stated that their scholarship program is seeking to attract more STEM scholars.

Out to Innovate’s lunch keynote speaker, Dean Hamer, Ph.D., of the National Cancer Institute, captivated the audience with a discussion of his news-making research regarding genetic links to sexual orientation. Dr. Hamer’s talk entitled “Out in Science: Science, Sex, and Society” presented an eye-opening account of his rise to leadership, both as a successful scientist and as an LGBT activist. One notable project has been his film “Out in the Silence” that documents the challenges faced by LGBT individuals in conservative, rural America. Listen to a brief interview with the keynote speakers conducted by Shirley Jahad for SCPR.org.

At the Expo Reception there were 26 exhibitors where attendees could network with institutions such as Harvey Mudd College, Northrop Grumman, and Raytheon. At the concurrent poster session, prizes were awarded to students from Caltech and Humboldt State University. Astrophysics graduate student Amy Trangsrud describes that “the Summit was a huge first for our community. It stood out for me as an event truly geared toward people like me.” Trangsrud of Caltech received a prize for the poster entitled “SPIDER: Inflationary Gravity Waves and Interstellar Dust with a Balloon-borne CMB Polarimeter”.

As perhaps the largest gathering of LGBT scientists ever, there was a unique opportunity to discuss sensitive issues in a non-threatening environment. On everyone’s mind was the sad tragedy of the recent spate of suicides among high school students. Keynote speakers as well as attendees alike voiced the need to reach out to the younger community for social support both through formal mechanisms (such as the It Gets Better Project) as well as through individual mentoring efforts. Graduate Student Trangsrud was inspired to contact the Gay Straight Alliance club at Thomas Jefferson High School for Science and Technology which Amy had attended. “When I went home over Thanksgiving they invited me as a guest speaker to one of their meetings. I believe the Summit rippled out through the community in a number of different ways and will grow in future years. What a great start!”

The 2012 Summit was held October 13-14 at Ohio State University. This new event complements other long-standing NOGLSTP activities including a business meeting, career panel, and reception held at the annual meeting of the American Association for the Advancement of Science (AAAS). NOGLSTP began as a AAAS affiliate in 1983. NOGLSTP has also organized a reception at the SACNAS annual meeting since 2005.

David Taylor (far right) was a speaker on the “Leadership and Activism” panel. 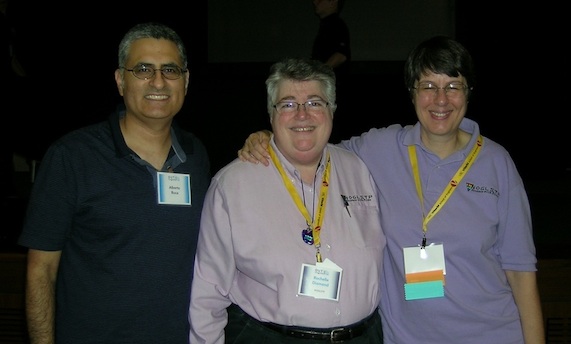 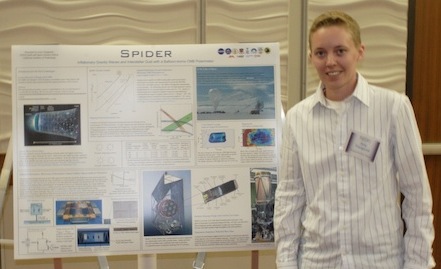 Amy Trangsrud is a NASA Earth and Space Science Fellow pursuing a Ph.D. at Caltech with primary interests in the development of technologies on the frontier of experimental cosmology. This work earned a poster prize at the Out to Innovate Summit. Trangsrud has also been the President of Prism, Caltech’s LGBTQA group, and is a passionate advocate for the community.

More information about the career summit can be found at: www.noglstp.net/outtoinnovate/. Watch a video about the Summit. Note that readers interested in learning more about being an ally and friend to the LGBTQ community can refer to this GLAAD website.

An earlier version of this article first appeared in the Fall 2010 issue of the NPA POSTDOCket newsletter on page 1. A PDF version of the shorter article can be downloaded here.MinorityPostdoc.org is now publishing original written works. Submit article ideas by contacting us at info@minoritypostdoc.org. This work is licensed under a Creative Commons Attribution-Noncommercial-No Derivative Works 3.0 Unported License.